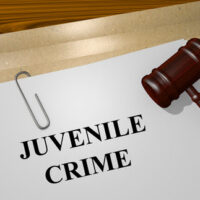 Two male teenagers, 15 and 16, were taken into custody in Palm City after a weekend crime spree, where they stole a vehicle with a gun inside and led law enforcement on a chase through three counties. They were taken into custody and as of this writing, are in jail in Martin County. However, what awaits them will be up to Florida prosecutors, as they are considered juveniles. Juvenile defendants generally need a knowledgeable attorney to ensure that their rights are respected and not ignored, even if they wind up being charged as adults.

Defendants from age 15-18 may be charged as juveniles, but Florida leads the nation in charging children as adults. This is partially because of Florida’s “direct file” law, which allows a prosecutor to move a juvenile case to adult court without any input from a judge. Nonetheless, a prosecutor may choose to leave a juvenile case in that system, depending on the nature of the charges at stake. Relatively minor offenses might lead a juvenile to a pretrial diversion program or a suspended sentence, and a clean record assuming all the conditions are complied with.

By comparison, a prosecutor who believes that the charges are too severe for juvenile court (where the focus is much more on rehabilitation than on punishment) can move the case to adult court. In adult court, a juvenile defendant will be treated much the same as any other defendant, with no real deference given to their age. The sentence, depending on the crime, will be similar to an adult defendant’s, though any previous lack of a criminal record might be taken into account.

The specific charges these teens are facing stand a good chance of landing them in adult court, should the prosecutor choose. Among other potential charges, the theft of the vehicle and the possession (however temporary) of a weapon by minors are perhaps the most serious. With rare exceptions, minors are not permitted to possess weapons, and being caught with one can ultimately lead to the suspension of one’s driver’s license, even if the offense carries minimal incarceration.

While the weapons charge is generally a misdemeanor, the vehicle theft could be up to a second-degree felony, depending on the value of the car and whether or not any damage was caused to the vehicle. A second-degree felony very often gets your case moved to adult court, though not always. The violent or non-violent nature of the crime can play a role in a prosecutor’s decision.

Regardless of the ultimate fate of the two teenagers, it is important to be aware that juvenile crime can be a very serious matter. If you need an attorney to represent your child, the West Palm Beach juvenile crime lawyers at the firm of Perlet, Shiner, Melchiorre & Walsh, P.A. have years of experience in these types of cases, and can work hard to ensure your child gets their day in court. Contact our office to speak to an attorney.