Do Police Have To Arrest Me For Domestic Violence? 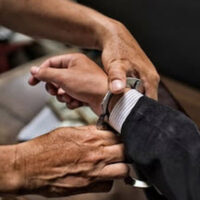 In some states, police who are called to the scene of a domestic dispute must, by law, arrest at least one of the people involved. This is usually rationalized by saying that even if a domestic dispute does not reach the level of intimate partner violence, it is a breach of the peace. Alternatively, if physical violence does occur, states want to regulate and punish that behavior so it does not happen again. If you are arrested due to a domestic dispute, you may face several different potential charges, depending on the specific nature of your situation.

Florida law states that police do not have to arrest anyone in the event of a domestic dispute, but may do so if they believe that there is probable cause for the arrest. However, the statute also says, explicitly, that the state’s public policy will “strongly discourage” arresting and charging both participants in a domestic dispute, because too often this tactic is used so law enforcement does not have to parse out who may be truly responsible for the conflict. The primary aggressor is the person who should face consequences.

If probable cause exists, you can be arrested without a warrant, though they cannot hold you for very long unless your offense is egregious and bail is denied. The exception to this, however, is if you commit a domestic violence offense by breaching a protective order. If you do this, the police must arrest you and hold you for up to 36 hours, to give your alleged victim a chance to get away.

Sometimes, one might wonder why anyone has to be arrested for a domestic dispute, given that so often, these issues are seen as private affairs. The answer is that because the state of Florida has a vested interest in stopping domestic violence, arrests are sometimes necessary so that neither party can drop charges and allow the alleged abuser to get away without consequences. Too often, the alleged victim of a domestic dispute will try and have the charges dropped, out of fear or a genuine wish to recant, but only Florida state’s attorneys can make the decision to drop a case.

A domestic violence charge can change your life. If you have been arrested in the midst of a domestic dispute, your next step should be to contact a West Palm Beach criminal attorney at the firm of Perlet, Shiner, Melchiorre & Walsh, P.A. Our firm has years of experience in these types of cases, and can work hard to make sure your rights are protected. Call our offices today at 561-721-0552 to speak to an attorney.