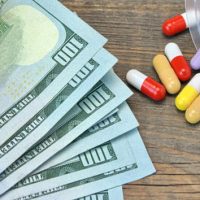 In late January 2022, a Palm Beach man pleaded guilty to one count of healthcare fraud for fraudulently billing Tricare and other Veterans’ Affairs healthcare programs, charging for compound medications that were not “medically necessary.” His is only one sentence in a far-reaching conspiracy that eventually saw several people charged with fraud. While it is unlikely that you will be charged for your part in an enormous multi-million-dollar scheme, prescription drug fraud is a serious crime that may saddle you with serious jail time.

Prescription drug fraud generally falls under the umbrella of healthcare fraud, because in most situations, obtaining and possessing prescription drugs will require defrauding a medical professional. The most common methods include:

Creating, altering, or otherwise forging a prescription is a second degree misdemeanor, but if you are stopped with prescription drugs you are not authorized to possess, the charges you face will be far more serious. The Palm Beach man faces a 10-year sentence for his count of prescription drug fraud.

For the average individual accused of prescription drug fraud, there are several different factors that a state’s attorney – or a judge – may consider in terms of which charges to file. One of the most important in Florida is the overall weight of the substance (or the mixture) in question – many drug laws differentiate by weight in terms of what to charge as a misdemeanor or felony. For example, possession of hydrocodone (Norco or Vicodin) is considered a third-degree felony, but if one is stopped with more than 14 grams in their possession, they will be charged with trafficking, not simple possession.

While compounding pharmacy fraud is an offense committed only by certain individuals with the power, prescription drug fraud, whether against public insurers like Medicaid or against private insurers, is still seen as extremely serious. Medical professionals are trusted to dispense prescriptions based on their years of study; to take advantage of this is seen as a flagrant breach of trust. It is crucial, if you face trial for these offenses, to take the charges very seriously; failure to do so can profoundly change your future.

While it remains to be seen what sentence the Palm Beach man may face for his role in the fraud conspiracy, know that these offenses are taken very seriously in Florida. If you have been charged with prescription drug fraud, the West Palm Beach drug crimes attorneys from the firm of Perlet, Shiner, Melchiorre & Walsh, P.A. may be able to help protect your rights in court. Call our offices today at 561-721-0552 to speak to an attorney.