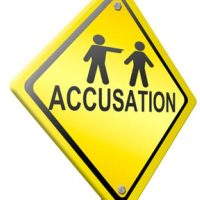 Statistics from the U.S. Federal Bureau of Investigation (FBI), along with scientific studies, estimate that the total number of false allegations of crimes like domestic violence and sexual assault to be somewhere between 2 and 10 percent. The myth that a large portion of reported accusations are false is simply that – but at the same time, false allegations do happen, and it is possible to be convicted even if you are innocent. If you have been charged with an offense you did not commit, contacting an experienced attorney is crucial.

What Do They Gain?

It is easy to be stunned by charges for crimes you did not commit, but it is important to understand why and how these things happen. By far the most common situations where false allegations happen – at least as far as researchers are able to study – is when the alleged victim has something demonstrable to gain. For example, if false allegations of domestic violence do happen, they very often happen during divorce proceedings.

Florida is a state which places a high premium on parents sharing responsibility (that is, physical and legal custody) for their minor children, unless the court holds that joint parenting would be a “detriment to the child.” In other words, both parents are granted custody unless evidence exists that one parent should not have equal parenting time. One of the most common and crucial types of “evidence”  is proof that a parent has been convicted of a first-degree misdemeanor “involving domestic violence.”

While a majority of false claims hinge around tangible potential gain, such as winning sole parental responsibility for your kids or being able to recover monetarily, sometimes a “victim” is simply vindictive – for whatever reason, the alleged victim may choose just to try and ruin your life, as recourse for some kind of perceived wrong. This can make your case harder to defend, but it is not insurmountable.

Regardless of the reasons you may have been accused, be aware that the consequences can be very real. In Florida, a domestic violence conviction cannot be expunged from one’s criminal record, and non-legal consequences like being terminated from your job or being evicted by your landlord may also come to pass. While it can feel overwhelming to try and defend yourself against statements you know are lies, it is imperative that you try and do so. The stakes are simply too high.

Most of the time, domestic violence allegations are very real, but whether they are real or false, they must be handled seriously. If you have been charged by a victim seeking to gain at your expense, the West Palm Beach criminal attorneys from the firm of Perlet, Shiner, Melchiorre & Walsh, P.A. can offer careful and experienced representation. Call our offices today to speak to an attorney.