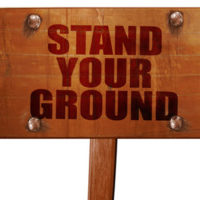 A new case involving the “Stand Your Ground” statutes is before the Florida Supreme Court.  Love v. State of Florida, Case No.  SC18-747.   Interested persons and associations are paying careful attention.   The issue before the Court is whether the statutory procedure in court for asserting “Stand Your Ground” is constitutional, and if the procedure is constitutional, whether the statute applies to persons who were charged prior to the recent amendment.

Floridians’ rights to bear arms are supposed to be constitutionally protected, and generally they are.   However, laws governing the use of those firearms have recently been in the news.  To be sure, Floridians can bear arms.  Common exceptions to that rule include laws that prevent persons with mental incapacities from carrying firearms and laws that prevent felons from possessing firearms.  These persons, along with the crimes they may commit, are often the focus of weapons charges in Florida. However, Floridians who use their lawfully possessed firearms in self-defense may also find themselves facing weapons charges.

Persons who legally possess firearms in Florida should be aware of firearms laws and defenses to any possible charges involving the use of those firearms.  Anyone following the news knows that the laws concerning firearms are subject to change.   If you or someone you know has been charged with a firearms offense, you should know that numerous defenses can be raised as part of due process.   Some of those defenses are described below.

The “Castle” Doctrine and  “Stand Your Ground” defenses

In 2005, the Florida Legislature enacted laws that have come to be known as “Stand Your Ground.”  These laws expanded an old legal doctrine that used to be referred to as the “Castle” doctrine.  Simply put, a person has a right to self-defense when confronted by an intruder in his or her own home or “Castle.”  When an individual is on his own property, and someone approaches him with criminal intent, an individual is well within his rights to neutralize the threat by any means necessary, even if that means fatally shooting the assailant.

The recent statutes known as “Stand Your Ground” further expanded the “Castle” doctrine to include situations involving persons who are away from their home.  These “Stand Your Ground,” provisions, in essence, did away with the duty to retreat.  Under certain circumstances, an individual on the street or elsewhere may use reasonable force to neutralize threats, which may include rendering the attacker unconscious or terminating their life.

Florida Statute 776.032(2)(2014) provides that law enforcement agencies may “use standard procedures for investigating the use of force,” but may not arrest the person using force unless probable cause exists “that the force … used was unlawful.”  Officers will investigate whether the person using force had a reasonable belief that the use of force was necessary, and the person using force must have a right to be in the place where the use of force occurred.  The Florida Supreme Court explained that, “Section 776.032 contemplates that a defendant who establishes entitlement to the statutory immunity will not be subjected to trial.  Section 776.032(1) expressly grants defendants a substantive right to not be arrested, detained, charged or prosecuted as a result of the use of legally justified force.  The statute does not merely provide that a defendant cannot be convicted as a result of legally justified force.”

Police are usually called to the scene after shooting events.  Crime scenes can be chaotic.  It is often difficult for police to make a determination after someone has been shot whether an individual or individuals should be taken into custody.  A defense attorney should be called immediately to represent any person who is taken into custody.

If prosecutors determine that charges should be brought, a good defense attorney must understand the current state of the law and the court procedures in order to fully protect a client’s rights.

In the case currently before the Florida Supreme Court, the facts were described as follows:  “Tashara Love and a group of women were involved in an altercation, which lasted approximately three minutes, outside a Miami-Dade nightclub.  At the end of the altercation, Love shot the victim, Thomas Lane, as he was about to hit her daughter.  Love does not dispute these facts.”    Later, the State charged Love with one count of attempted second degree murder with a firearm.  Love claimed that under Florida’s “Stand Your Ground” law, she was immune from prosecution because she was defending her daughter.

Because charges were filed by the State Attorney, Florida’s Stand Your Ground law was interpreted to place the burden of proof on Ms. Love to show that she was entitled to the benefits of immunity from prosecution at a pretrial hearing.  However, the Florida Legislature had amended the Stand Your Ground law to require that the State has the burden of proof at the pretrial hearing to show that the charged person was NOT entitled to immunity.  The argument currently before the Florida Supreme Court is whether the recent amendment placing the burden on the prosecution to prove that the person is NOT entitled to immunity at a pretrial hearing is constitutional, and if it is constitutional, whether persons like Ms. Love, whose incident occurred prior to the recent amendment are covered.

The League of Prosecutors has filed a brief claiming that prosecutors should not have the burden of proof at a pretrial hearing and therefore the new amendment is unconstitutional.   The Prosecutors argue that the State has the right to have the entire case heard by a jury.   The NRA has filed a brief in support of the amendment claiming that prosecutors should have the burden of proof at a pre-trial hearing.  Others filing briefs include the Unified Sportsmen of Florida, Inc., the Florida Public Defenders Association and the Florida Association of Criminal Defense Lawyers, Everytown for Gun Safety and the Brady Center to Prevent Gun Violence and the Giffords Law Center to Prevent Gun Violence.   The Florida Supreme Court has yet to decide these issues.

Persons being investigated should take this time to educate themselves on the law and the defenses they can present to avoid an unnecessary prison stay.

If you’re unsure which defenses will apply to your situation, we can help. If you are being investigated for weapons charges or are just released from jail due to criminal charges being filed against you, Perlet & Shiner, P.A. want to hear from you. Call 561-721-0552 immediately to be connected with an experienced attorney.

Brief of Amicus Curiae League of Prosecutors in the Supreme Court of Florida, Tashara Love v. Florida, Case No. SC18-747